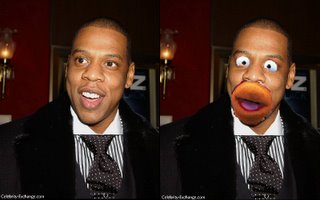 Who doesn’t know and love Gobo, Wembley and the other inhabitants down at Fraggle Rock, not to mention Sprocket, The Gorgs and…and…and, ah all those memories. Yet I had no idea there was a rappin’ Fraggle ’til Cam’ron of Dip Set was nice enough to point it out.

That’s right, all the Jiggaman talk about “The ROC” may actually have been about Fraggle Rock, as Killer Cam shares his discovery that Jay-Z resembles a Fraggle a great deal. He does this on the outro for the track “You Gotta Love It”, his first in a line of many future jabs at the Def Jam president. Apparently most of the beef stems from Cam taking Dame Dash’s side in the beef over Rocafella, but it could go all the way back to Jay-Z’s alledged stapping of Lance “Un” who was Cam’s boss at Untertainment at one point.

The song isn’t all that. There are a few fun lines about Jigga turning the big 4-0 a couple years back, (Freeway did it much better when he dissed Jaz-O with: “You’re like the bottle dropped in Menace (II Society) – fourty and broke.”) He also expands on the old-ass metaphor by making fun of Jay-Z wearing sandals in public. This woulda been way funnier had he fused with with Nas’ constant camel-disses to Jigga and called him “camel-toes.” Or maybe not.
While I love Cam and Dipset in generally (especially JR Writer!) I don’t see this beef going too many places. Jigga’s busy burning up guestappearences and being friends with Nas. Now if those two were to get at Cam, then we’d really be in business!

Meanwhile in other hip-hop, the simpsons and wrestling related news, Diamond Dallas Page, former WCW champion and all round legendary wrestler is suing Jay-Z for using the ROC-diamond handsign. Diamond Dallas Page has used this sign in public for ages – see him doing it here (also refering to his finisher as the Diamond Cutter). I really don’t see how Jigga can win this battle. Though it is slightly ironic that a rapper would get suid for waving gangsigns!?

“Doing all sorts of twisted shit with they fingers” – Jay-Z