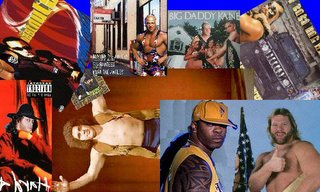 You may have read certain wrestlers aren’t too fund of rappers. Mr. Perfect said flat out rap was crap before his untimely death and Diamond Dallas Page went ahead and sued Jay-Z for throwing up “the roc” years after DDP had originated the hand sign. So aren’t there any wrestlers that actually like rappers? No…stupid, but to correct that wrong, I took it upon myself to make up some that do. So remember to click the individual entries on the top ten as hilarious pics will unfold. Behold, here’s the top ten:

Fairly obvious, why wouldn’t the 7’4, 500 lbs + giant from the French Alpes enjoy some snot-nose from the Bronx ripping off his name. Especially since Andre the Giant from Show and AG is the size of three apples stacked onto eachother. But as he once cheekily remarked: “not a giant in height, on the strength I’m a giant in length.”

Why? Cause they’re stone crazy, that’s why!

That’s right, America’s protector with his trusty 2×4 is a fan of Busta Rhymes. At least I imagine he would be after Busta rapped: “Busta Rhymes is like Hacksaw Jim Duggan” on Pharoahe Monch‘s Simon Says Remix. No explanation why he thought himself to be like the cockeyed one-move wrestler always sporting the red-white-and-blue, but after such a compliment, how could Jim Duggan not like Busta, tough guy? Hooooooooooo!

Cause they work the Angles – sharp and precise! And that’s how the decorated olympian gets down to business as well, oh it’s true!

A fairly new alliance of rappers and wrestler, but a good one none the less. While the wrestling barbarian was more of the old school fur-covered, face paint sporting kind the Bo$$ Hogg Barbarians seem more into foul language and cars. But hey, at least J-Zone sported a fur a million times cheaper than Barbarians attire when he played at Loppen.

It’s a Big Daddy / Big Red Machine Thing. Undertaker’s long-lost (and/or burnt and killed) brother certainly knows if there are two things that aren’t easy it’s pimping and remembering to always keep your mask on. Oh well, seems he forgot the last part and became a midcarder. Wrath of Kane!

The Road Warriors Hawk and Animal shouldn’t be able to recist everyone’s favorite underground rapper. Even from beyond the grave you can just hear Hawk screaming: “Dangerdoom? RRRRRWWWHaaat A RUSH!”

Mexico’s favorite son, the prince of Tijuana, Tito Santana has to mark out for Juelz Santana. Afterall Juelz is a Diplomat and now that Tito’s career as a wrestler seems over he must do something to keep the green card intact. Arriba la Dip Set!

Well, Jim Neidhart always was about as mental as the Funk Doctor, and to top it off, today’s Jim Neidhart’s birthday. Congrats Anvil!

The next time Taker steps in the arena, he better recite the eulogy words I manifest or it’ll be a Full RIP for the dead man! Why? Cause there are so many spots – but they’re hard to urn.