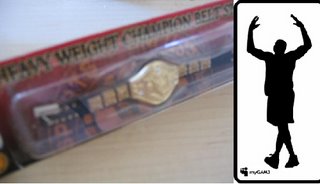 As the mighty Stetsasonic once proclaimed on Talkin’ All That Jazz “What you reap is what you sow”, well after having rocked this funky blog for over a year, some blogging benefits are starting to show.

First off, when my friend Ann Noyd, multitalented artist and hip-hop commentator, traveled to Japan she was kind enough to bring me back a present. Now this is from Tokyo so it could really have been anything ranging from sushi to ricecakes. But knowing my passion for professional wrestling from The hip-hop, the simpsons and wrestling blog, she brought me something from the Tokyo dome. The Tokyo dome plays host to many events but New Japan Pro Wrestling also have their events here, and wrestlers such as Hulk Hogan, Terry Funk and Chris Benoit have wrestled in it, and of course national legends such as Antonio Inoko (owner) and Masahiro Chono have had their share of glory within the squared circle there.

In any case she brought me back an awsome New Japan Pro Wrestling mini-titlebelt which is now prominently featured attatched to my mp3-player. Thanks a million Ann!

Secondly and more related to blogging as such and not so much The hip-hop, the simpsons and wrestling as blogging in general the people behind Gam3 streetbasket have asked me to be their liveblogger for their annual tour around Denmark’s streetbasket courts. While I’m most certainly appreciative, it comes as a slight surprise as my prior engagement to Gam3 included a rap-set for their finale-show in Copenhagen, which I guess went all right. The second set the same night at Rust, however, did far from that, as I had no DJ, was slightly tipsy and only had the instrumental for one song. This resulted in me doing a sort of stand-up act comprised of blue humour and vicious personal insults.

In other words, the good people at Gam3 are either really overbearing or do in fact read this blog from time to time. I definitely give daps to them also, and look forward to their tour round the country in the beginning of July. Come check us out!