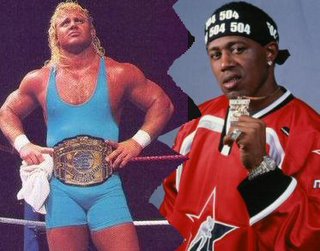 Fat Joe said it best once: “Rap is like the WWF”. This might explain why I love both, and can’t wait ’til someone famous says: “Rap and wrestling are like The Simpsons”. As the loyal Hip-Hop, The Simpsons & Wrestling muthabloggers out there might have noticed, wrestlers have used rap-gimmicks for years, so it came as somewhat of a shock when Mr. Perfect aka Curt Hennig flatout stated: “Rap is crap!”

The wrestler not only said this back in 1999, but along with a crew called The West Texas Rednecks (Curt himself was from Minnesota) recorded an entire song dedicated to rap being crappy with such memorable lines as:

“I like country music / I love country girls
I like Willie Nelson / and don’t forget about Merle
There’s only one thing that I hate
Cuz it’s a bunch of crap / I, I, I hate rap!”

Now you may think that an avid rapfan such as myself would have been offended by this song, but bare in mind that wrestling’s all about gimmicks and playing the role as best as you can. Add onto that, that at the time Perfect was fueding with a wrestling fraction called The No Limit soldiers led by Master P no less, and it’s pretty obvious which side I’m on. Yihaaaah! To their credit No Limit luckfully didn’t consist of Mystikal and Mia X getting into action, but skillful Mexican wrestlers such as Konnan and Rey Mysterio, but still, feel free to hate any kind of musical express that ends in what sounds like bowel movement. UUUUGGHHH!

For those of you not familiar with Curt Hennig he’s the son of ring-legend Larry The Axe Hennig, a 350 lbs bull-sized wrestler, known for giving Rowdy Roddy Piper his first match (which lasted all of 13 seconds) and roughing up a young version of The Road Warriors when they refused to sell opponents’ offense. After learning the craft in AWA Curt Hennig traveled to the then WWF, became Mr Perfect, a character known for executing moves with perfect precession, being overtly arrogant and generally a very entertaining technical wrestler.

Even rappers recognized this, for instance I still remember a dude getting Source‘s Unsigned Hype for the line “Grinning like Curt Hennig, when I’m winning”, and aside Last Emperor he’s the only rapper I’ve wanted to check out to simply because of reading his lines. If anyone remembers who it was, please post it here.

Sadly Curt Hennig passed away in 2003 due to a cocaine overdose, an addiction he alledgedly aquired after his many injuries due to high-risk bumps taken in the ring. According to this tribute to Curt “Rap Is Crap” was played at his funeral.