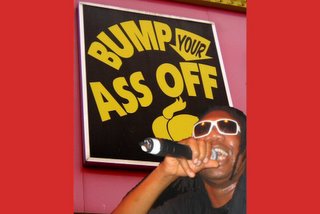 ”KRS-One specializes in music”…okay! But the last couple of years have made it painstakingly clear that the Blastmaster has an entirely different focus as well – the rear section, the buttocks, the hiney, the pleasure pillow or the good ol’ ass!! In fact so much so that lately he’s made more references to acts involving people’s behinds than he has laid claims to to be Number One (I guess ‘number two’ would be more appropriate).

Back in the Boogie Down Productions days it wasn’t like that. KRS-One would rap on his merry way about the danger of beef, self destruction, white people and wack MC’s. He may have had a little hint at what was to come on BDP’s “We In There”, but it was nowhere near full bloom. When the crew crumbled something weird happened; on each and every guest appearance Kris made, he injected dubious comments about asses. Allow me to demonstrate:

“Don’t slip with your lip talking shit with your clip / Showing your ass as I blast into it” – Poor Righteous Teachers feat. KRS-One “Conscious Style” (1997)

“Some people may not like KRS-One but they must respect him, cause they know the kid gets all up in they rectum” – KRS-One “MC’s Act Like They Don’t Know ” (KRS-One, 1995)

Wow, conscious Kris sure gets dirty with it. All that’s well and good, we’re all allowed to have our preferences, and hey, just cause he dance the go-go, that don’t make him a homo. it’s just weird then that KRS would actually try to lash out at other people for being into a piece of ass like himself. As he said on Fat Joe’s (ironically nick-named Joey Crack) sophomore album:

“Rap magazine dating back to, Tougher than Leather / The only reason you got, such an extensive rap collection / ‘Cause most of your rap mags are all stuck together” – Fat Joe feat. KRS-One “Bronx Tale” (Jealous One’s Envy, 1995)

The song is fittingly titled, I might add, since KRS from the sound of it has never passed on a Bronx Tail himself. But seeing as he’s apparently anti-masturbation, it’s a puzzle what the master actually blasts in real life?!

I guess there’s no real conclusion to this piece, other than the fact KRS may not be in favor of neither sex nor violence, but will beat up some ass quicker than you can say “PM Dawn!”.

PS: This article is in no way an attempt to bash homosexuals, it’s okay to be gay! It is, however, intended to poke fun at the fact that certain people who make anti-gay comments on a regular basis seem rather preoccupied with male asses themselves.