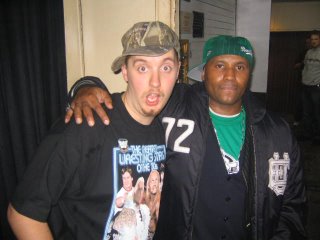 I can’t believe it’s been this long. Borat hosted the MTV Europe Awards, The Simpsons ran a full episode of Bart in 8 Mile-mode and wrestling’s just getting crazier than Ultimate Warrior by the event.

Never the less the only real update I have for y’all is that I’ve finally gotten my Kool Keith autograph back!!! Some of you may recall the autograph I got back when I was like seventeen has long since vanished along with my Dr Octagon Mo Wax original. But fret not muthabloggers cause if there’s one thing that’s for certain, it’s that when rappers run out of hits, they come running to Copenhagen.

As was the case with Keith. I was set to write a review of the concert and possibly do an interview with him. As far as the review, that went all good (read it here if you’re up on Danish), but as usual when it’s big name artists (Angermanagement Tour, Nas, KRS-One etc.) the interview for various reasons didn’t happen. Never-the-less after the concert finished I ran across the stage and saw Keith still hanging out with the blondie he caught during the “where all the lovely ladies at?”-segment of the show. He signed the Masters of Illusion album (which is now complete) posed for a picture, and even complimented my “Greatest Wrestling Stars Of The 80’s”-T-shirt. What a man, wooo!

Anyways, there’ll be more updates of the blog during the weekend, and I’m even contemplating getting a domain for it, so I can host music, film and such!