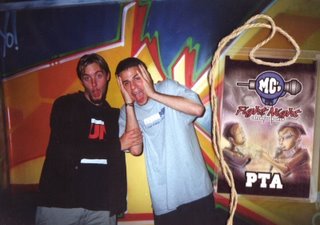 Battling is alotta things but first and foremost it’s a surefire way to avoid writing new material, thus keeping your song production at an absolute minimum. It can however, bring you to crazy ass places and get you in situations where you have to sober up within an eyeblink and get your arsenal of lyrics ready to square off against some famous jamous hotshot, who everybody knows and likes more than you. Here are some of the famous people I’ve battled:

The setting was the first Aarhus Took It ever in 2000, after Eyedea and Slug had guested Frez Force‘s show. For the unaware Eyedea is this youngbuck from St. Paul Minnesota who’s down with Rhyme Sayers and at the time was a big part of Slug and Atmosphere‘s live show. In 2000 he had also won The Scribble Jam, The local Blaze Battle and was on his way to winning the national Blaze battle.

So, I talk a short while to Slug who’s this lanky rapper that stares at you with his dead eyes when speaking (I’m surprised he’s not a scientologist). I then ask if Eyedea has battled anyone in Europe, and Slug replies no, so being the cocky teen that I almost was I ask why can’t I battle him on stage the next day. Slug’s smart idea however is to have me battle Eyedea right then and there, leading to me standing in front of this youngster grinning with a gab between his teeth the size of Dave Letterman’s and an aura around him that he’s unbeatable.

After I’ve said about a minute and a half of rhymes it only takes him 8 bars to take me down and the rest of his verse is pretty much just a victory showcase. T’was a good learning experience, that paired with losing to Per Vers around the same time reminded me that you need to change mindset when you battle someone much more confident than you, which came in handy over the years.

And yes that’s us in the picture. Back then I bleached my hair and everything. Man, what was I on?

This battle is kinda funny, ’cause in a lot of ways it was totally unfair. Chords is this Swedish rapper whose rep at the time wasn’t that big, but now he’s down with Timbuktu and Jujurecords and everybody rightfully considers him the man.

He entered the 2001 MC’s Fight Night, as did I and we drew each other in the first round. However he rapped in English in front of a Danish audience and I rapped in Danish so it was really easy to clown him. At the time it was a pretty big win for me, but it did start a trend for a certain MC’s Fight Night judge. He’s since, as he did in that battle, voted against me every time he had the chance. You can check the battle for yourself here. You can check the battle for yourself.

FEMone is a rapper from Norway with a Chilenian background. He belongs to a crew called Equicez (it means x’s in Spanish), and whenever someone asked him about certain rappers he would reply “fuck ’em” hence his name F’EM. I entered this freestyle contest in Oslo called Straight Spittin cause Definite, a friend of mine, who’d end up winning the Norwegian-rhyming part was also entering. It turned kinda ugly during the battle as we both lost our temper a bit, and I ended up losing after a bonus round. But in the end I think it was an entertaining battle, where I got to showcase I’m a lot better at freestyling in English than Danish.

I returned for the Norwegian Rock The Spot freestyle contest a couple years later and won that with FEMone as a judge so I don’t think he carries grudges. You can see pics from the battle here, and the events actually ended up in a chapter of Hip Hop Hoder about Norwegian hip-hop which can be read here.

Those are the people I can think of off the dome, that made most of a name for themselves. Holla back tho if you want more warstories from the battlefields, cause I’ve cunningly saved a few tales. I’m glad I got to face off against some of the people that I like to call friends such as Strøm, Jøden, C-Style and Per Vers over the years, but as I’ll be a judge as this years Fight Night I’m winding down my battle-career these days.