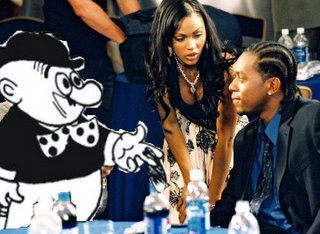 Now granted, hiphop has seen its Hurricane G, DJ Typhoon, hell even Kurtis Blow sounds kinda windy…but that the late Storm P. would come back as a rapper wasn’t really in the cards, was it?

For those unfamiliar with the moniker “Storm P.” it was the calling name of Robert Storm Petersen (1882-1948). The Danish satirist, inventor, actor etc. was known primarily for his work as the creator of daily comic-strips in newspapers and such. He was particular good at depicting the gabs between society classes and older readers of this blog (yeah, right!) may remember his Peter og Ping comic about a man and his pinguin. Even in the new milenium, his name is synonymous with drawings of crazy, complicated Wiley Coyote-styled abstract inventions. You can read more about him at the Storm P. Museum.

So what’s new? Well, this has actually been brewing slowly. First I see the name “Storm P” on a DJ Clue mixtape. Then I see the name again in a Source magazine ad for some Flavor Unit release and it’s starting to get creepy. Now I visit my local Blockbuster videooutlet and there the #¤%”#” is again, this time co-staring in a Queen Latifah flick, what the fluck!

With a little help from Google, it turns out Storm P is synonymous with Quran Pender. The rapper-slash-actor got his start with Queen La’s Flavor Unit (a New Jersey based hiphop company predating 50’s G-Unit with about 15 years). He was a part of their younger posse, geniusly titled “The Unit” and released an album with them. He also worked on music for the movie “Chicago”, and now he’s all up in “The Cookout” playing an NBA-cat at a picnic gone horribly wrong.

Apparently the movie went horribly wrong as well (read review here). But I, for one, am rooting for young Storm P. to do his thing until he reaches a status where he gets the attention of the Danish media. That way they can steal this mistaken identity story from me, much like they did the one about the Royal monogram and Funk Flex’s logo.