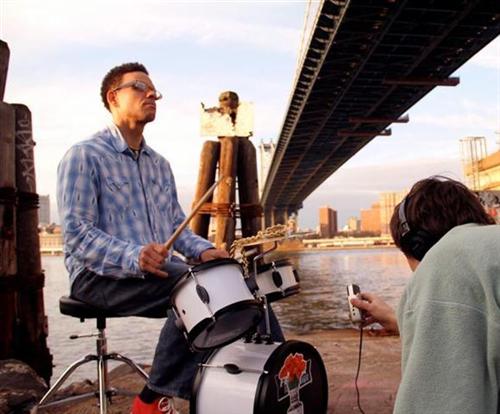 In a time where you can publish your thoughts on the internet and link to flickr-photos and youtube-videos of all your exciting adventures, why did you choose to write something as lo tech as a book?

Because I’m a low-tech man. I also wanted to do it for my Grandfather, whose book was never published. He worked years on it and got nothing but rejection letters. Self-publishing wasn’t an option then, so I did it to live out the dream for him, too. It’s risky to publish books, though, because the average person’s attention span nowadays is about 30 seconds. I was just something I wanted to accomplish; no more, no less.

If you were to label your book is it a biography, self-help book, hip hop history or something completely different?

It’s 33.4% autobiography, 33.3% curmudgeonly rants that assail things in this world that I’d define as bullshit, and 33.3% appreciation for the unappreciated; whether music or in life in general. The whole book is anathema to what we’ve been told is correct and standard; everything from the method of publishing, to the stories, to how we view success in America, to the general attitude. It ain’t for everyone, but people who love it will really, genuinely love it.

Even though you’re retired as a rapper the book is still written as by J-Zone, do you write “in character”?

Partly, yes. The humor, the attitude, the language – they’re all there. It’s like you’re reading one of my old rhyme books or something. But then some of it is out of character. As a rapper, I never really showed much of a serious side and I never got too personal. With the book, I felt more comfortable tackling issues and emotions that I was too bold and proud to tackle as a rapper. Race, family, humbling moments in my career, and not having answers. Even when I rapped about shit going wrong as J-Zone, it was always funny and I had an answer. The book still uses humor when failure comes up, but it’s out of character for me to admit I was in fucked up and vulnerable spots and didn’t have answers. Like, musicians never really retire. They either fade into obscurity and try to keep a low profile, embarrass themselves by trying to stay relevant and fronting to the fans like they’re still on top when they’re not, or they self-destruct. It wasn’t easy to come out and say “J-Zone is officially over. I don’t have any passion to do it anymore and really don’t care. I have no idea what I want to do next with my life.” People will judge me for that and call me a quitter and stuff, but I can’t lie about what I feel and to the fans it’s like I’m admitting defeat, even though I’m not. I just reached a point where doing J-Zone hip-hop shit was so no longer fun and entirely frustrating, so I went back to doing it as an occasional hobby. That’s something I could never do in the J-Zone “character.” It’s a lot more human than a J-Zone album, but all of those comedic, sarcastic, and profane elements are still there.

Although hilarious and sarcastic, after reading your book, I find your output as a rapper much less ironic. Do you think people got the notion that you were pretty straight up about a lot of the stuff you rapped about during your active years? 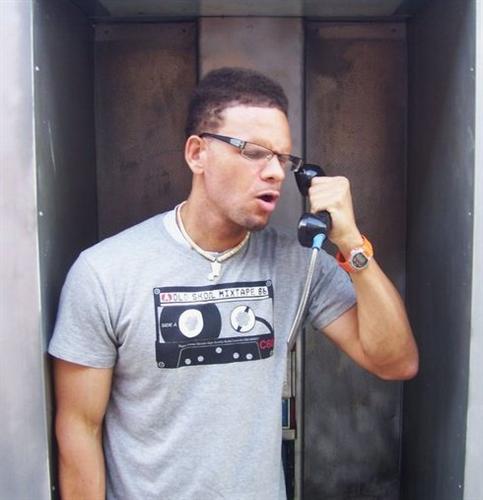 It surprises me how many people thought I was 100% serious. A lot of the rap stuff was shit I felt deep down, but couldn’t say as Jay the person. A lot of it was stress relief and over the top venting, but it wasn’t total vitriol. Some of those feelings were 100% accurate, but some of them were exaggerated, too. Like with women, sometimes I’d meet a woman who knew of my music and we’d talk for 30 minutes and she’d say “I thought you’d be a rude, sexist animal trying to fuck me after two minutes, but you’re actually not a barbarian!” When I had a bad situation with a girl, I’d get stress relief by making a song and calling the girl a bitch or whatever, but the song was just my way of airing out my grievances. I respected women who respected themselves and respected me; I’m not some woman-hating animal. But if a girl was acting like a bitch, best believe I’d make a song about her and call her ass a bitch, plain and simple! To me it was just innocuous shit-talking for entertainment’s sake, but people are so stiff that they started calling me a misogynist. So when I met women who knew about my rep as a misogynist and I treated them well and as an equal, it shocked the shit out of them (laughs).

Poison Clan, Mobstyle, Disco Rick and Tim Dog often get shoutouts in your writing. What is it that attracts you to rap that is so hardcore it almost borders on cliche most of the time?

Becuase they weren’t afraid to go over the top. One thing I hated about the hip-hop scene during the years I was active was it was as if having fun and being a nut was a crime. Like, rappers always came out on stage in regular street clothes, didn’t joke around, didn’t have fun – the whole idea was to make everyone think that they were such a serious MC and their ego didn’t allow for anything that could be considered a joke. Rap is supposed to be diverse. We need political MCs, we need battle MCs, we need comedians, we need storytellers, we need tough guys, we need peace makers. I just tried to bring that over the top funny thing and all those groups you mentioned were planted so firmly in their hardcore aesthetic to the point where people may think they’re cliche, but they’re just doing what they do. The indie rap scene was very rigid and boring during my tenure. A few artists had the balls to do different shit (Necro, Atmosphere, Louis Logic, Edan, Celph Titled, Madlib, etc.), but many acts were just competing to be the best MC instead of having fun.

I noticed online that you’re a fan of Luke Campbell’s biography, as am I. My favorite part is the court transcripts. Do you now wish you had gone to court over the sample clearance to be able to put the case in the book?

Now, maybe yes, for the sake of making that chapter a more interesting read. But back then, hell no, I was shook! I thought they were gonna sue me blind!

You mention the people you did shows with were oftentimes your exact opposites, is there anyone you would be happy to be in the same box as? I think I you and Devin The Dude have certain similarities…

I think Devin and I would’ve been a good show. He was on one of my albums and we had a lot in common. I always toured well with Louis Logic, too. We used to compete to see who would bring the house down harder! He’s a great performer and an eclectic artist; we had a friendly competition going back in the day. We brought the best out of each other when we were doing shows on the same bill.

I was lucky enough to catch you live in Denmark a few times. Great stuff. Do you have any memories of those shows that maybe didn’t make the book because the Larvik-incident overshadowed them?

I remember playing a gig Copenhagen in 2004 and one of the promoters told me an old school rap group (who will remain nameless) came to town and did a show the month before. After the show, they tried to steal a couch from the venue. A couch! Like they could sneak a big ass couch out of the club, to the hotel, and on the plane back to America. That shit had me cracking up. I remember doing the “Aarhus Took It” festival in 2006, too. MC Eiht cancelled and J-Ro of Tha Alkaholiks was just there hanging out, so they gave him Eiht’s spot. J-Ro asked me to be his hype man because I know all the Alkaholiks shit by heart; I’m a huge fan. We performed the song “Choir Practice” from one of my albums that night, too, for the first and last time. That was amazing and totally impromptu. I found out an hour before the show that I’d be doing that and it was on my day off!

The book dwells a lot on failure, what’s your take on hip hip as a movement, is that story of failed potential as well?

Definitely. Like I said earlier, hip hop had so much potential to expand creatively into different things. It’s done that commercially. Like, I never thought they’d use it for car commercials and mainstream marketing. That shows you how far it has come. But from a creative standpoint, it was incredible with room for expansion in the early 90s, then the corporations got involved and started making the rules when the musicians should’ve been the ones making the rules. It was pigeonholed, segregated and put in a box; by the time I got into it professionally, everything that seemed so natural to me (like humor) was a rule-breaking thing. I was once told, “you’re a black rapper and you’re rapping about jerking off because you didn’t get any pussy at the club last night? You can’t do that. The black dude never admits he didn’t get the pussy!” I laughed when I heard that, but then I saw how true it was. If you couldn’t give an artist a clear label (“gangsta,” “back pack,” “jiggy,” “for white college kids,” “for black kids in the hood,” “for Asians who play football,” whatever.) , he or she’d probably be ignored. I think that’s what happened in my case. Good music is good music and I think hip-hop lost sight of that concept for the sake of marketability.

From Odd Future to Action Bronson and beyond, is there anything out here on the hiphop-scene these days that you still find interesting?

I’ll be the first to admit that I haven’t kept up. I’m not gonna bash anything new, I’ll just say it’s not for me. A lot of rappers my age talk about how fucked up shit is now with these rappers not paying dues and getting known through blogs and You Tube. I probably agree, but then again, I came up in a totally different era and have different values. People older than me would probably say I ain’t real because I never performed in the park in the Bronx with Kool Herc. I was a fetus then! Same thing applies with this generation. Rap is generational and I’ve learned that over the past year or two. Will I lie and say I like the new stuff for the sake of staying relevant and not looking like a “hater?” No. But will I waste breath trying to bash it? Absolutely not. I’d rather spend my energy telling people why Tim Dog’s first album is the greatest rap album of all time than why Drake’s isn’t. I stay in my lane.

Do you have any further plans for your endeavors in writing, can we expect a novel or a shortstory from Jzone?

Writing a book ain’t easy. It takes years. In the meantime, I’m learning to play drums, writing for my sports job to keep the pen game sharp, DJing, and just getting life experience in general. Life experience is what creates the ideas I’ll need for the next book, and I hope to write another book one day.

“Roll through the ghetto pumpin Ice Ice Baby / Think I give a fuck it’s better than the shit I heard lately!”