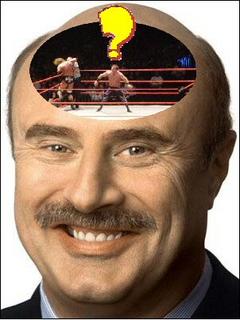 Cathy has dragged her husband Paul on the Dr. Phil show. She believes wrestling is consuming his life to the point where the obsession is hurting their marriage. Dr. Phil, displaying the tricks of the trade that made him the richest psychologist ever, addresses Paul and asks the million dollar question: “Do you know it’s not real???”

You sure got him there Phil! Paul makes up some foggy answer about parts being fake, which leads the Doctor to reveal the best kept secret of professional wrestling: “It’s just men dancing!” Dr. Phil does give brief credit to the wrestlers for being great stuntmen, but not soon after he taunts Paul again for “watching men dancing”, which in Dr. Phil’s world must equal the ultimate homoerotic act. Needless to say Paul hardly seems cured from his addiction by Dr. Phil’s revelations, but he does get tickets to a wrestling event of his choice, which pleases him, so the show ends on a high-note. However, the segment left me wondering something that in time led to me writing this column; What in the name of Superfly Jimmy Snuka does Dr. Phil think people watch professional wrestling for?

To use Dr. Phil’s dancing analogy, wrestling is men pretending to live out a battle through well-choreographed moves for artistic purposes + both wrestlers and dancers wear tights – case closed! You can’t argue that this isn’t part of professional wrestling, but it’s also a spot-on description of break-dancing. While Booker T does have a mean backspin, there is certainly more to it than that.

Paul tries desperately to give Dr. Phil a sound reason for being addicted to watching grown men playfight: He mutters that he enjoys the plot. Dr. Phil finds the mere thought of watching wrestling for the plot ridiculous. This is semi-ironic seeing as American psychologists such as Jerome Bruner advocate the idea that the human psyche organizes everything in connected stories and plots – we constantly strive to adjust our impressions so that they make sense in reasonable stories.

In wrestling we like to call those stories ring-psychology. When they make sense to us fans, even if they’re surprising, we’re watching good wrestling. When the stories are incoherent, the wrestling is bad – or to use RD Reynolds’ perfectly coined phrase: wrestlecrap.

In “New York – The Rough Guide” the author advices tourists that they should attend a wrestling event and then explains what that includes: the audience seeing the national anthem followed by a ‘real American’ kicking some foreign grabler’s butt. That’s one way of making the story coherent and relevant to the fan – but of course there are tons of others.

Stories vary in size of course. They can be as small as a wrestler constantly putting his opponents right arm under pressure – hitting it and putting it in arm locks until the adversary is worn down and ready to be subjected to a spectacular finishing move. Watching Chris Benoit beat Orlando Jones in 7 seconds isn’t really the same as him winning after a 30-minute display of scientific excellence is it? I’m pretty sure it felt like premature ejaculation to most of the viewing audience.

They can also be far bigger like Macho Man Randy Savage and Ric Flair battling over who was the true love of the late Miss Elizabeth. Even in such showdowns the story is heightened greatly when the match finally does take place – the whole building is cheering for The Macho Man and suddenly he gets a nasty leg injury instantly putting him in the role of underdog. Savage is fully aware of this, so he sells the leg injury for the rest of the match.

The injury is fake – but the story is real!

Watching wrestling should be like reading a good book or watching a play at the theatre. You know it’s a work of fiction and constantly search for the sentence where the author reveals his true colors or when the actor steps out of the role. But there are moments when wrestling captivates us to the point where we feel we’ve stepped inside the ring and are suffering or basking in glory along with our favourite wrestler. Those moments are products of ring-psychology and no matter how smart marks we become, we will always feel that rush when the plot thickens in the ring.

In fact it doesn’t differ much from watching Dr Phil’s show where arguments always end with the good Doctor being right – Sorta like the Hulk Hogan of talk shows. Yet we tune in each week to see how Phil will tell off this troubled soul. We have to suspend our disbelief in order to enjoy the show though. Because it doesn’t really help Paul and Cathy that Dr Phil gives them tickets to a wrestling event of Paul’s choice, but Paul jobbed to Dr Phil and expectedly didn’t put up much of a fight, so the Sigmund Freud of Texas can celebrate his win by handing out prices. The difference between wrestlecrap and shrinkcrap is hardly noticeable.

View a brief recap of the Dr Phil show here!