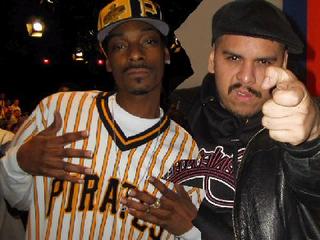 The Hip-Hop, The Simpsons & Wrestling blog has it’s very first guestwriter! I encountered The Pza at the Wrestlecrap-forum. He had a giant pic of KRS-One on his profile, so I figured since we share a love for Hip-hop and wrestling he might have something interesting to contribute. He sure did, and now I just wonder if he’s into The Simpsons. Here goes:

So I’m talking to a good friend yesterday about music. More specifically who the greatest MC of alltime is. I gave him my opinion and reason (FYI it was Immortal Technique) when he cuts me off, “So you meanto tell me you think some underground MC who NOONE has ever heard of is greater than Snoop Dogg?” I laughed. My laughter, however, was cut short when I noticed theserious look on his face… “Oh my God, you areserious aren’t you?” he responded, “Of course I am…Look, Snoop has sold millions of records, he is a household name, and he has his own line of clothes, that equals success and in turn that makes him the greatest MC of all time.” I was taken aback, shocked, appalled, I just couldn’t believe that someone would be so ignorant to the true meaning of hip hop.

Let’s, just for fun, examine the lyrics of Snoop and Immortal Technique.

Okay, so Snoop just killed some dude and he doesn’t care about the family of this person.

“This shit is run by fake Christians, fake politicians /
Look at they mansions, then look at the conditions youlive in /
All they talk about is terrorism on television /
They tell you to listen, but they don’t really tell you they mission /
They funded Al-Qaeda, and now they blame the Muslim religion /
Even though Bin Laden, was a CIA tactician /
They gave him billions of dollars, and they funded his purpose /
Fahrenheit 9/11, that’s just scratchin’ the surface”

Wow, a huge difference huh? Now I will say that Snoop is the most successful MC of all time. But that, by no means, makes him the greatest of all time… Just a little food for thought. And I’ll leave you with another ImmortalTechnique lyric to ponder:

“They say the rebels in Iraq still fight for Saddam /
But that’s bullshit, I’ll show you why it’s totally wrong /
Cuz if another country invaded the hood tonight /
It’d be warfare through Harlem, and Washington Heights /
I wouldn’t be fightin’ for Bush or White America’s dream /
I’d be fightin’ for my people’s survival andself-esteem /
I wouldn’t fight for racist churches from the south,my nigga /
I’d be fightin’ to keep the occupation out, my nigga /
You ever clock someone who talk shit, or look at you wrong?
Imagine if they shot at you, and was rapin’ your moms /
And of course Saddam Hussein had chemical weapons /
We sold him that shit, after Ronald Reagan’s election”

credit: The Pza, I LOVE JINNY PARK Ghosts are REAL… Deal with it!
Read my weblog at: http://theimmortaldsanchez.onfinite.com/