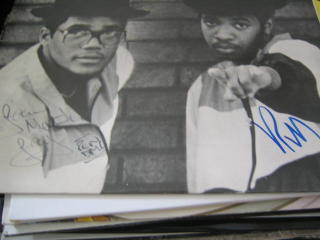 I’ve been collecting autographs ever since famed Danish poet and writer of childrens books Benny Andersen signed my copy of Snøvsen back in 4th grade.

When I got into hip-hop I quickly realised that artists would stay after shows and sign autographs. I also noticed that if you had brought the artist’s album along (or even better bought it from his merchandice stand at the venue) the chance of getting the John Hancock heightened. For instance when I brought a 12 inch to an Arsonists show it was the first time they had seen the final print of that record so it got heavily signed. I think autographs on records are cool ’cause they tie the music together with meeting the actual artist.

Run and Jam Master Jay autographing my copy of their debut album at Rock Show in Aarhus was a pretty sweet deal. Run and DMC would mostly sign T-shirts, but Jay was walking around the crowd and seemed genuinly happy to see that old vinyl. Common Sense was another early autograph, and he added “just another case of PTA” which was a freshfest for me. On a rap-level Masta Ace writing “Death To The Wack MC’s” on Slaughta House is a top autograph too. Thes One of People Under The Stairs damn near wrote an entire essay on the back of their 12 after I pointed a misspelled word out, Double K just wrote “I’m Faded”.

A lot of the records I’ve had signed were due to me working as a helper at the Aarhus Took It hip-hop festival. Usually this involves picking the artist up at the airport and checking them into the hotel, making sure they can get to the venue and then later bringing pizzas for the festival crew. Foreign Legion were unknown to me when they arrived but they were real friendly and put on a hell of a show. Same deal with brittish Killa Kela and DJ Plus One. J-Live was a favorite rapper of mine, but he was mad stuck-up and his show wasn’t that good. JuJu of Beatnuts was a pretty cool guy but he stole a buncha records from my fave. store – so screw him. MOP, Pharoahe Monch and Big Daddy Kane are some other rappers to perform @ Took It. The nicest of the bunch was Last Emperor who not only signed my records but also helped me beat Jøden and J-Hef at table-fussball and invited me on stage.

A few of my autographs are from Copenhagen shows, for instance Souls of Mischief and Smut Peddlers @ Loppen, Christiania. I actually introduced Smut Peddlers and the rest of Eastern Conference ’cause DJ Noize had failed to show. Generally I never get autographs at shows @ Vega ’cause you’re not allowed to bring a recordbag into the venue, but I did manage to get Pete Rock‘s autograph. He musta been in a hurry cause all he wrote was PR!!!!

I’ve also gotten records signed during interviews like this Rise 12 inch and Dizzee Rascal‘s first album. Usually I don’t ask for autographs while interviewing but sometimes it just seems cool to do.

Autographs vary greatly in quality. For instance I was set to interview KRS-One, but someone else took up the time I guess cause I all I got was this crappy autograph that looks nothing his cool tag. Busy Bee was also on hand at that non-happening interview. Guru on the other hand has a fine autograph style and even wrote Gangstarr 4 Eva on the album – we’ll see how that turns out. Redman not only signed Whut Thee Album but also drew an extra mustache on his own image.

Some write more than others. Kut Masta Kurt and Motion Man not only signed my album but also a miniposter when I had brought to Billund Airport after their Took It show. Kurt’s note read: “Peter you’re a good driver but you need a new Run-DMC shirt”.

More recently I’ve gotten autographs from Tim Dog as well as Bootie Brown and Imani of Pharcyde @ Rust. Rust is really turning out to be a cool spot for autographs cause the artists usually stay for nightclubbing.

I almost never ask for or get autographs from Danish artists which is a shame, ’cause their music is just as memorable. Gísli wrote this cheeky comment on the innersleeve at his release party.

Some of the first autographs I got were unfortunately lost (or stolen!) so my Kool Keith/Dr. Octagon autograph from his show at Aarhus’ Ridehus circa. 97 is still MIA. Others like ?uestlove from Roots refused to sign autographs and instead opted to talk to the fans for a while, so he’s still cool in my book. There are only a few artists I’ve seen live I regret not getting autographs from, mainly Kool Herc, Jay-Z and Nas. Slug from Atmosphere as well as Eyedea who I was lucky enough to freestyle with would have also been great.

I’ll probably keep collecting autographs as long as I go to shows, but since I hardly ever buy new music these days. Tankpasser from Odense came up with the idea of having producers sign breaks they’ve sampled. I kinda like that. Maybe I’ll have to switch to a plain old autograph-book.