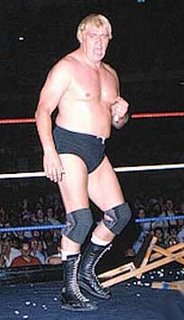 So a regular day at the office aka the room we’ve put the PC in. I’m checking my mail, nothing special. But then I find I’ve gotten a letter from non other than WWF’s very first Intercontinental Champion Pat Patterson.

Pat Patterson got the IC belt in a tournament held in Rio de Janeiro (actually they didn’t have a tournament, they just told the fans back home that, so they could hand out titles.)

He wrestled some classic matches against the likes of Ted Dibiase and a cage confrontation with Sgt Slaughter. He’s probably most famous though, for being a major force behind the scenes, where he’s worked as Vince Mcmahon‘s right hand man. Well, that and the fact that he’s extremely homosexual, hits on the young wrestlers and has a had a year-long relationship with the Brooklyn Brawler. What’d ol Pat want to talk about? Well as you can tell by this copy of the mail, he’s apparently become a spammer of sorts.

Oh well, we can’t all end our careers on a high-note.