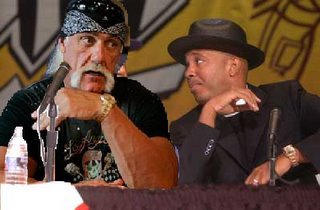 At first I couldn’t believe it. But it was actually happening before my very eyes. I’m at the press-conference for the dual launch of the second seasons of Run’s House and Hogan Knows Best. Most people thought reality TV would play out after Puck got kicked of The Real World; who the hell would wanna be see another spin on The Osbournes? How could you possibly find someone to rival Ozzy when it came to legend status, rehabilitated drugabuse, and general craziness? Turns out the 80’s icons Hulk Hogan and Run of Run-DMC were right around the corner. We – I mean me – here at the hiphop, the simpsons and wrestling blog was lucky enough to get an exclusive interview with the two gentlemen, as they announced the sophomore seasons of their shows. What follows here is a word by word transcript:

It’s great to see you gentlemen, how are you today?

Hulk Hogan: Well let me tell you something mean Pete, it’s a great feeling for me, to get the
chance to have all the little Hulkamaniacs out there enjoy another season of the Hulkster doing what he does best: Walk around in my underwear while overprotecting my teenage daughter, brother!

Swell, and how about you Reverend Run, are you also excited?

Reverend Run: Good morning. Have you ever concidered that there is no better leader than example. When I show the world my family I am holding up a mirror of every family in the world, from Hollis to Hollywood. God is love.

Could we have a little back history on what made you two icons?

Hulk Hogan: When I held Andre The Giant over my head and bodyslammed him at Wrestlemania III infront of 93000+ people. The weight of his 700 lbs body made the ring collapse and he died a few months after.

Really? I thought the official attendence at Wrestlemania III was around 78.000. And you didn’t lift him over your head, you had him at shoulder height. And wasn’t he around 520 lbs? And hey wait, didn’t he die in 1993, six years after Wrestlemania?

Hulk Hogan: Let me tell you brother, when I had Andre the Giant cinched up in the launch position, when I slammed him through the Trump Plaza, brother! From New York, down to Tampa, Florida, the fault line brokek off! And as Andre the Giant fell into the ocean! As my next two opponents fell to the ocean floor and I pinned ‘em, so did Donald trump and all the Hulkamaniacs! But as Donald Trump hung on to the top of the Trump Plaza, with his family under his other arm, as they Sank, to the bottom of the sea. Thank god Donald Trump’s a Hulkamaniac! He knew enough to let go of his materialistic possessions, hung on to the wife and kids, dog paddled with his life all the way to safety! But something happened, Donald ran out of gas, and all those little Hulkamaniacs, they just hung on to the largest back in the world, and I dog paddled us, backstroked all of us to safety!

Cool, I don’t think we’ll get much further with this. How about you Run, what are your credidentials?

Reverend Run: Here’s a little story ’bout a boy named Joey, king of the world got a very long story. Made alotta money, lived a life of glory. Did what he done but he end up sorry.

Oh that’s too bad, what made you end up sorry?

Reverend Run: Joe was a leader way before his time, made by the people and he kicked much rhyme, had a two-seater and he rode past signs, smoked alotta cheeba and he drank much wine.

That’s terrible then what happened?

Reverend Run: One day Joey had to stop his scheme, got a revalation and came back clean, got a second chance to fulfill his dream, now Joey is a reverend and he’s been redeemed!

Oh wow. So speaking of being redeemed, was there any moment in the past season that you’re somewhat embarrased by?

Hulk Hogan: Let me tell you, brother. The fact that after being the world champion eleven the only wrestler that wants to hang out with me is Nasty Boy Brian Knobbs. And I have a feeling he’s only around to drink the Hulkster’s beer, brother.

Reverend Run: You think that’s bad. How about spending your time finding the hypest rap crew, with the flyest name, Union Turnpike, then introduce them to your media-mogul brother, and he discovers that they’re totally talentless and thinks you’re a bit insane on top of that? U be illin’ Hogan, u really be illin’.

Has the series done anything for your other family members?

Hulk Hogan: Let me tell you, brother. The Hulkster’s daughter is just about ready to be the next Britney Spears, except her chest is real. As real as my 6’8 frame, brother.

Reverend Run: I would say my whole family has gained alot, as they have seen their father lead by example as I put them all to a competitive battle for a hunnid nallas.

Do you mean a hundred dollars?

Right. What can we expect of the next season from your shows?

Hulk Hogan: Expect the Hulkster to return to the ring and have five star matches where I outwrestle Chris Benoit, brother. All the little Hulkamaniacs will cheer as I flex my 24 inch pythons for one final time brother!

And you Reverend Run?

Reverend Run: I won’t stop rocking til I retire!

I though you had in fact retired?

I noticed the two of you are wearing the same gold watch, much like Eddie Murphy and Johnny Gill have on the same male-bracelet as they go out, any specific reason for that?

Hulk Hogan: Hey, just because wrestling is homoerotic doesn’t mean the Hulkster takes a walk on the wild side, brother. That one time with Pat Patterson was just to get my career started.

All right, all right, to end on a positive note, got a message to the fans out there?

Hulk Hogan: Train, say your prayers and don’t continue wrestling with a false knee and hip.
Reverend Run: False hip? How ’bout a game of hoop Hulk? I’ll play you for a hunnid nallas!

Run’s House and Hogan Knows Best can be seen on MTV Nordic here in Scandinavia. The second seasons of the shows should be airing this summer. Make sure to check Run’s website to listen to his new music, and read his daily words of wisdom. RIP JMJ and Andre The Giant.