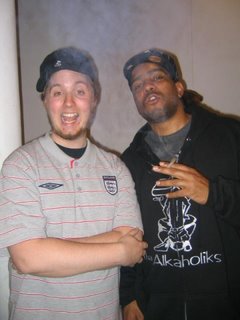 Anyways, summer came early round here. (assumingly as compensation for spring being about a season late) so I’ve been spending alotta time in the real world.

What’s really good? Well, I’ve been hired as a judge for The MC’s Fight Night competition after 6 years of loyal freestyle service, of course I’m really grateful for that. I’ve caught up on The Simpsons again – having seen all the episodes of season 17 so far, hopefully there’ll be some blogging about that.

Thursday I was the host at a one-day hip-hop festival in Elsinor. It was all kinda hectic, but I did get to hang out with J-Ro and watch an awsome showcase by Warlocks in front of 10 people at 2 o’clock at night.

So now that me and the blog be reacqainted I promise to hit y’all off with some more fun stuff in the nearer future.