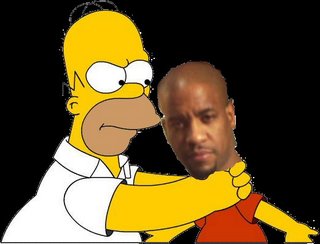 Last Saturday during the broadcast of Klub P3 on Danish National radio this here blog almost came into play. The reason being Szirhley Nova Beanca Rasmussen (sic) asked Noize, veteran battle DJ, if he remembered whether Masta Ace had rocked over a sample of this Simpsons theme. Noize wasn’t quite sure, so he came up with this reply. To my knowledge there’s never been played a PTA track on Noize’s show, but thanks for the shout in any case :-)

Naturally here at the hiphop, the simpsons & wrestling we follow all hybrids of our three spearhead topics, so Masta Ace‘s “Spread It Out” is a classic to us. Produced by Domingo is first saw light on his “Game Over” compilation which had a comic/videogame theme. Aside this track it had “Supa Brooklyn” (Smif N Wessun rocking over the theme for Super Mario Bros), a spliced together collabo between Ace and Eminem and a lot of forgetful crud. But peep the track, it’s double tempo and Ace does his thing with Homer ad lips.

Of course we expect this to be the beginning of a host of media coverage for the blog, so cheers Szhirley and Noize.

Phun Phact: Szhirley herself has covered The Simpsons theme on the short vignette that functions as the opening for Den Gale Pose’s Definitionen af en stodder album.

En tanke om “Masta Ace, The Simpsons and this Blog – almost – makes it to the radio”