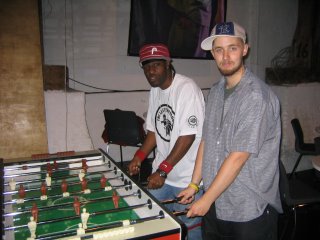 Originally this blog was intended mainly as an outlet for me to brag about my undertakings. Along the way I somehow forgot to go for the gusto, so this is the first in a line of posts about accomplishments in various fields I’ve reached over the years. The first entry is about my sharing microphones with famous rap-stars.

As you readers may or may not know, I’ve been rapping for a number of years here in Denmark, and freestyling for almost as many. Yet it wasn’t until I moved to Copenhagen, I found out how easy it is to get on stage during rapshows. You don’t need to put out an album, you don’t need promotion, god donut, you don’t even need to be booked. All you have to do is wave your hand and slamdance your ass to the stage as soon as the rapper shouts “Any MC’s in the house?!” I used to think it was kinda lame to represent, but now I actually feel it’s obligatory to step up if you can. It can really be quite a fresh touch on the show, I particularly remember Nappion from Aarhus rhyming with Mad Skillz, this Icelandic rapper really impressing at a Common Sense show, and recently this kid in front row doing a perfect Wu-verse with Method Man. Also, I can’t forget my girlfriend Mismarie serving competition at a memorable Bahamadia show. But hey, this was supposed to be about me! So here’s a list of rappers whose show I’ve bumrushed.

Tha Alkaholiks: My first attempt to get on stage and it sucked. By the time I got up there, it turned out it was a drinking contest and some chick had taken my place.

Erick Sermon: This was actually the most fun. 2 years ago Erick Sermon was booked for a show with legendary underground heroes Ultramagnetic MC’s and one hit wonders Fanny Pack. Naturally only Erick and the P (as in Pack, not Parrish) show up. So Erick does his show and it’s pretty good, especially “React”, “Music” and whatever EPMD material he did, but then he asks if there are any rappers in the house. The first dude on stage is actually Bukki from the legendary Danish funk-rap band U.R.D. Somehow Erick rejects this guy (woulda been great hearing him again) and instead chooses me. Little does he know, it’s my birthday, and yes I’ve been drinking Bacardi like it’s my…forget it. Anyways I do 8 bars where I manage to insult Sermon and rhyme: “I represent for the culture, everybody knows we only showed up to hear Ultra”. after that Erick quickly snatched the mic away and looked at me angrily with his slightly lazy green eyes.

Tim Dog: Happened at Rust I think this summer. Tim Dog’s show was hot, everybody sang along with “Fuck Compton” like they had wrote the shit, and when he asked for MC’s ain’t too many dared ‘step to him’ (if you know what I mean). So I get up and do a quick freestyle, and since it’s for Tim Dog I rap a little about his history and all. While you may think Tim Dog is this angry unfuckwithable character it turned out he was really humble and gave me applaus and shouted: “That was nice. My man came off the dome!” He also signed autographs as you may have read so that whole night was smooth. There’s a review of it here.

Funkdoobiest: This was during their show in Vega. Apparently Tomahawk Funk hasn’t been part of the show for ages, so it was down to Sun Doobie and DJ Ralph The Funky Mexican. Sun Doobie was great, he was real skinny but would do Hulk Hogan poses flexing his non-existing muscles between songs, and Ralph The Funky Mexican blended electro with DJ Ugerløse-type powerscratch at all chances. Fresh! Sad thing was they only had like a half hour show, so their hypeman tried to get people from the crowd to rhyme – and he got me. At that point Sun Doobie had left the stage, but I did manage to talk about Ralph’s haircut and other stuff…
A lot of other stuff as a matter of fact. I was drunk off of Hennessey at the time, and I think I kept going way past the intended timeslot. Still fun to have been rhyming with the Soul Assassins…Almost. Read review here.

Last Emperor: He actually invited me on stage. He didn’t have a DJ with him and he needed someone to pause and fast-forward his CD for the show. So while I didn’t get to rhyme with Emp, he rhymed about me, something to the effect of: “I got my man on the beat, and his name is Pete”. Yeah Emp! While that was great in itself we also played a mean game of table fussball making it a truly memorable experience.

So that’s the list of mics shared with greatness, and if you wanna follow suit it’s real easy:

First of all you have to be fairly close to the stage around 35 minutes into the show, ‘cause they’ll do the mic either then or after the encore.

Second, have a rhyme prepared if you don’t want to freestyle.

And third, make sure you’re drunk enough to not freeze up, but sober enough to remember a line or two.